I always have a blast when I go on Mass Appeal on WWLP – TV, and today was no exception! I had so much fun creating some birthday party theme ideas for boys and girls on today’s show. If you aren’t in the viewing area, or if you missed today’s show, have no fear! I’ve got the clip from my two segments, as well as photos, for you here. You’ll also find the “how-to” directions for the different ideas at the bottom of this post. 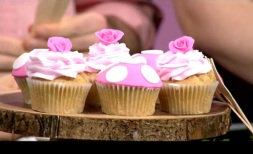 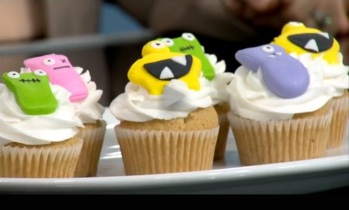 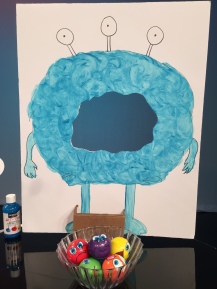 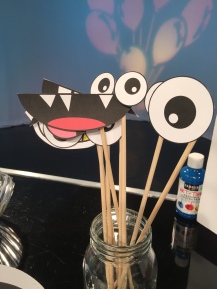 CLICK THE LINK BELOW TO WATCH THE SEGMENTS!
http://wwlp.com/2015/03/02/budget-friendly-1st-birthday-party-ideas/

What you’ll need:
White cardstock
Black cardstock
Pom-Pom Kits (purchased on Etsy)
Stapler
Staples
Circle template
Scissors
What you do:
Trace larger circles on the white cardstock, then smaller circles on the black cardstock. These will serve as the eyes. Glue the small black circle to the white circle. Set these aside.
Open the pom-pom kits you purchased. Follow the instructions included which say to fan out one side of the tissue paper (like shown above) and start peeling the layers of tissue paper downward toward the center (like shown above). Repeat for the other end until you end up with a full round ball of tissue….a pom-pom!
Then, staple the eye you made earlier anywhere you’d like on the pom-pom monster. These can be hung around the party space or you can set them on the table as a centerpiece.

What you need:
Large white foam board
Sharpie
Exacto Knife
Scissors
Paint
Paint brushes
Bean bags or light foam balls
Cardboard box
What you do:
First you will want to get creative and draw the mouth, remembering that the bean bags or balls have to fit through when thrown. Once you have done that, draw your monster around that mouth and paint it.
Then, take the exacto knife and cut out only the the part of the mouth that will be the opening where the bean bag or ball will be thrown through. Set this aside for now.
Grab a cardboard box (any size you’d like) I chose a smaller box so I could set mine on top of a table. Cut the flaps of the box off on the top of the box. Once that is done, you’ll want to use a sharpie to trace the end of the foam board onto one side of the box against the edge where you cut the flaps off. (See photos above) Leave a good amount of space at the bottom half of that side. (See photos) Once you have traced those on both sides, you will want to use the exacto knife of scissors to but that slit out. This will serve as the part of the box that you will stand your monster foam board into. (See photos) Voila! Your monster will be standing upright and be ready to be fed!
Silly Monster Photo Props:

What You’ll Need:
Wooden Dowels
Scissors
Glue Gun & Glue Sticks
Monster photo prop template (found on Etsy)
What You Do:
First, you’ll want to cut out the face shapes from the template. (I found mine on Etsy) Flip all the shapes over and glue one of the ends of the dowel to the shape. Make sure you shape is facing the way you want it, so you don’t end up with an upside down prop.That’s it!

Color Your Own Monster Party Hat:

What You’ll Need:
Monster hat template (I found mine on Etsy)
Crayons or colored pencils
Stapler
Staples
What You’ll Do:
This will be a fun party activity for kids to do themselves. First, they should color in their monster. Then cut out all pieces of the template. The instructions that came with the template said to use glue or tape, but I felt it would be more secure with a stapler. So, I stapled the two sides to the front of the hat (monster), and then again at the back. You’ll want to measure the childs head with the hat before stapling, so they it’s not too small or too big. That’s it!

For the Magical Forest theme:
Jar Full of Fairies:

What You’ll Need:
Clear jar (wide enough to fit the battery pack on the lights into)
Tiny lights/Twinkle lights
Batteries
Fake moss
Scissors
Twine
Fairy themed place cards
What You Do:
Take the tiny lights out of the box and install the batteries. Place the battery pack into the jar, leaning against one side upright, with the on/off switch face up. This will make it easy to turn on and off once your fairy jar is complete. Lay a layer of fake moss on the bottom, then put a layer of lights, then moss, then lights and so on. Hint: sticking the bulbs into the moss as you go makes it look more magical. Once the jar is full, and all lights have been placed inside the moss, close the lid. Cut out your fairy place cards, punch a hole into one corner and string with twine. Tie this around the jar to serve as a magical place card at your party! Guests can take them home as favors!

What You’ll Need:
Extra large balloons (found on Etsy)
String
Tulle
Fake flowers
Helium tank
Scissors
What You Do:
Fill the extra large balloons with helium. Knot them and and tie your string around the knot. Open up your tulle and wrap one layer around your balloon like shown in the photo above. You can secure the tulle with a twist tie if you’d like, or when buying your fake flowers, get some with a wire stem and use that to secure the tulle. That’s it!

Look how many of you stopped by!